Recent Artificial Intelligence achievements rely on the ability to train models on large quantities of data. This requires scaling two processes: high-quality data creation and model training. The first can be achieved by using a data labeling platform like Kili Technology, where you can quickly annotate images, videos, DICOM, text, and documents with high-quality standards. Model training can scale through distributed training.

Indeed, the increase of the Deep Learning algorithms’ performance relies on the capability of training models on massive datasets, sometimes composed of items themselves getting bigger. To handle this inflation of training data size, leveraging several machines efficiently is key. In this article, we will introduce distributed learning and how to implement it. We will then focus on the data-parallel distributed training, which covers most of the cases in real-world ML.

What is distributed training?

Distributed training is the process of training machine learning algorithms using several machines. The goal is to make the training process scalable, which means that handling a bigger dataset can be solved by adding more machines to the training infrastructure.

Distributed training provides more CPUs and bandwidth to process big amounts of data. However, leveraging this additional capacity optimally is a real challenge.

What is the difference between distributed training and federated learning?

Federated learning, like distributed training, assumes that the data is distributed across several machines, and then can be seen as a variant thereof. However, it is often not done for scalability reasons, but rather for data privacy, availability, or security reasons. The data is kept on each infrastructure machine (or edge), but this is a constraint more than a commodity.

When to use distributed training?

You have no other choice than running distributed training when:

How to do distributed training?

Data parallelism relies on these steps: 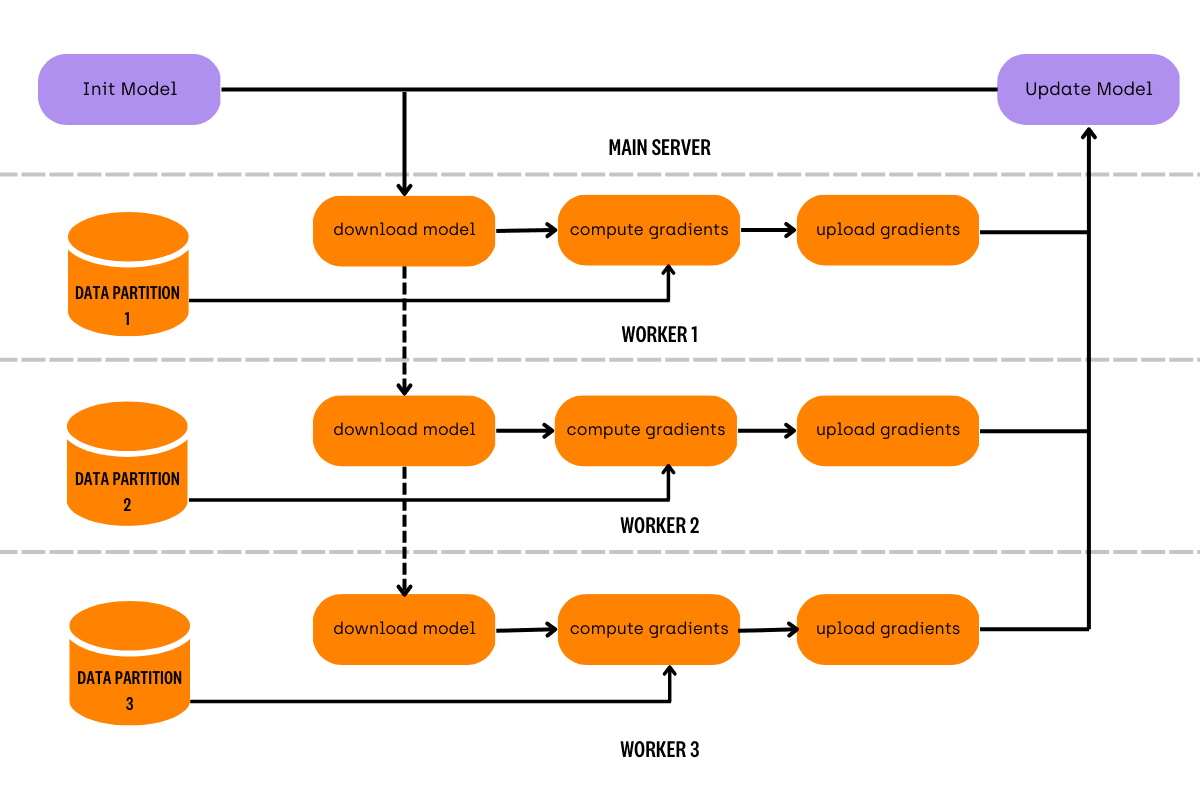 There are several ways to make the gradient computations handle data distributed on several machines. 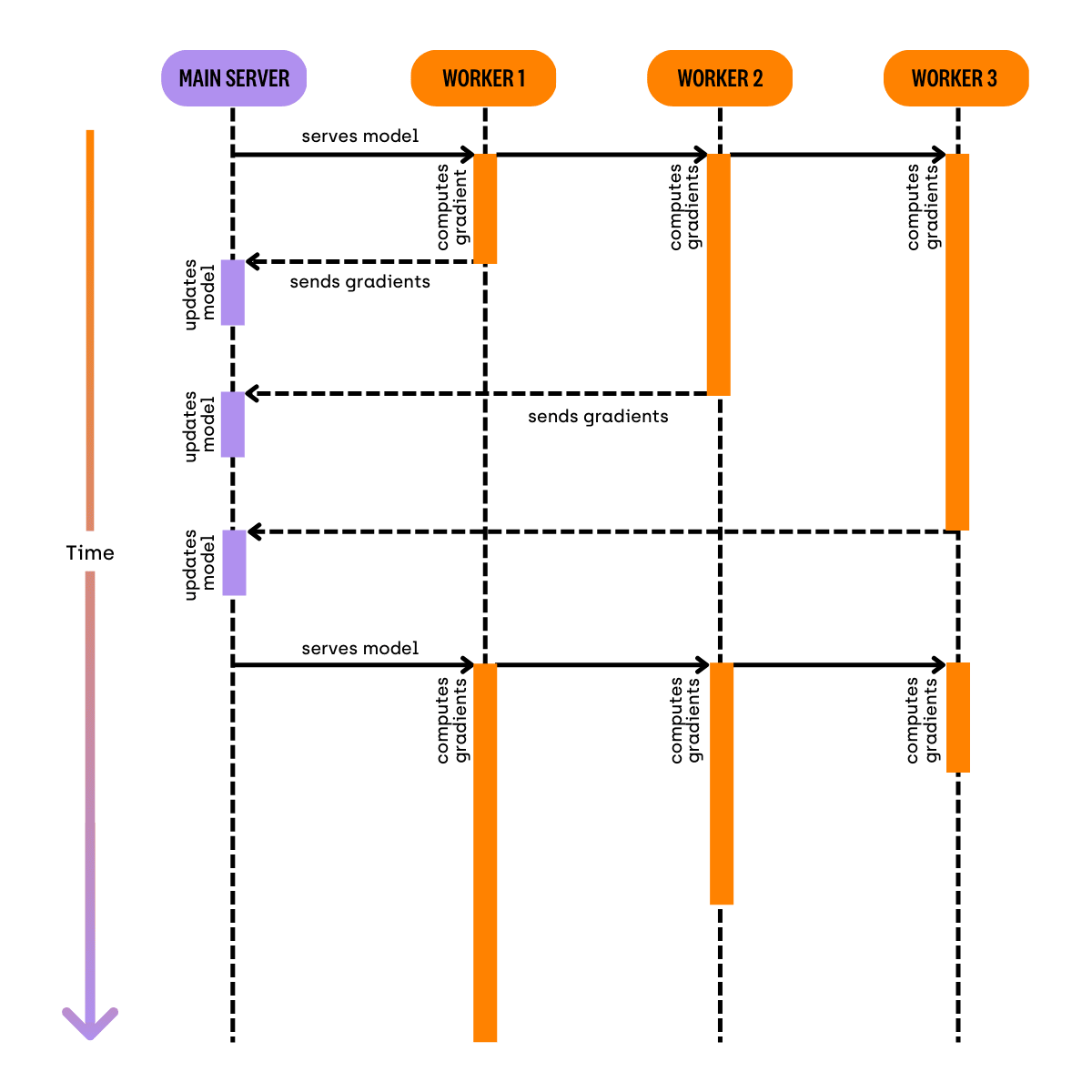 The synchronous updates rely on the fact that the main server waits for each worker to finish their gradient computations to complete the model update and serve it again to all the workers for a new iteration. The consequence is that this process is rather slow because it waits for the slowest worker. This can be mitigated by approaches like: 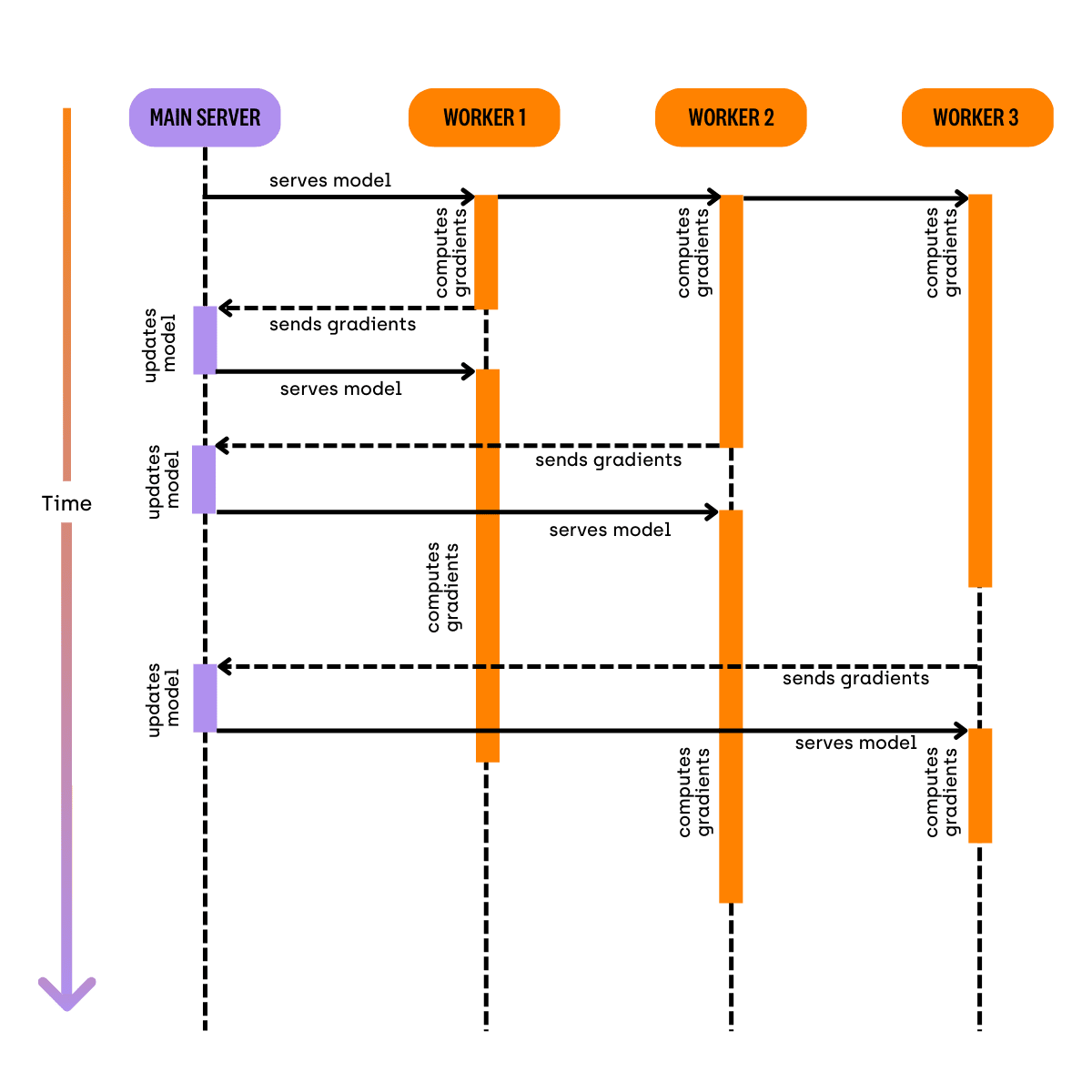 The asynchronous updates work as follows: the main server updates and serves the model to all the workers each time a worker delivers a gradient update, which can cause race conditions (updates are computed on a worker on a model state that is already obsolete). This can only work if the weights that are updated simultaneously are sufficiently distinct between two concurring workers.

Fortunately, it is the case for very large models where only a small portion of the weights are updated at each gradient update. In this case, the convergence is the same as in the synchronous case, but with a higher computing efficiency.

Synchronous updates can be slow, but some added engineering can make them work as fast as asynchronous updates. The latter is easier to implement but depends on the weight gradients' sparsity.

It’s all about tuning

Once you have decided about the model update policy, tuning the worker’s batch size and the learning rate is fundamental. Why is it different from a single machine’s gradient descent algorithm? If you consider synchronous updates, the model is not updated until all the batches are received from the workers, which makes a virtual batch size of B = N x b where N is the number of workers, and b the batch size of a single machine. b should be large enough to compute significant gradients, and N can also be large when large-scale problems are addressed.

Single machine update from a batch 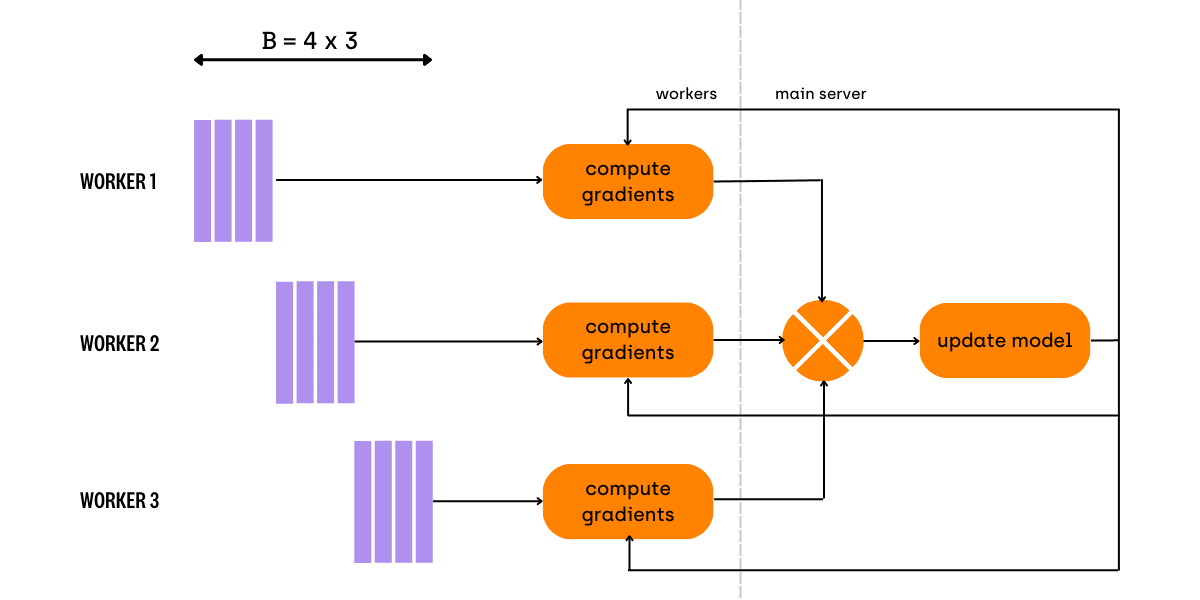 This makes the number of steps in an epoch lower and does not decrease the loss at high speed. This can be mitigated by putting a higher learning rate, at the potential cost of convergence stability. So tuning is important to seize all the benefits of parallelization.

Once the gradient update strategy has been decided, it is time to pick a framework to integrate parallelization into your machine learning algorithm. In the rest of this document, we will use the Horovod framework. Horovod is a distributed Deep Learning framework compatible with Pytorch and Keras and can run with several infrastructure backends like Kubernetes, Ray, or Spark.

We will examine the example given in the repository for MNIST training:

Here are the main Horovod functions that should be used to make the model training distributed:

The PyTorch DistributedSampler does the data distribution part:

Now you have all the tools to create a distributed training process for a PyTorch script!

You can also have a look to other distributed training approaches that are specific to the ML frameworks, like: