Cross-validation is a statistical technique employed to estimate a machine learning's overall accuracy. It is a valuable tool that data scientists regularly use to see how different Machine Learning (ML) models perform on certain datasets, so as to determine the most suitable model.

Cross-validation (CV) is a simple concept to comprehend and execute, making it a convenient method for comparing distinct ML models' predictive capabilities.

This article will explain what a CV is, its significance to data science, and how it can greatly benefit an ML models' overall accuracy.

What exactly is Cross-Validation?

CV is a technique used to train and evaluate an ML model using several portions of a dataset. This implies that rather than splitting the dataset into two parts only, one to train on and another to test on, the dataset is divided into more slices, or “folds”. And these slices use CV techniques to train the ML model so as to test its predictive capability and hence accuracy.

Different portions are gathered to build a training set, and the remaining ones are used to build a validation set. This process ensures that the model is utilizing new data with every training and testing step.

CV is employed to guard a model against what is called overfitting: which is a scenario where a model would merely “learn by heart” the samples it has seen in the training set. Consequently, the model would continuously maintain a perfect predictive test score but would be unable to predict useful results on unseen data.

The three key steps involved in CV are as follows:

The Advantages of CV are as follows:

The Disadvantages of CV are as follows:

So, how do you cross validate in machine learning?There are two primary types of CV testing methods, and they are categorized into two general categories called Non-Exhaustive and Exhaustive Methods.

The five key types of CV in ML are:

The holdout method is a basic CV approach in which the original dataset is divided into two discrete segments:

The Hold-out method splits the dataset into two portions

In the majority of cases, the size of the training dataset is typically much larger than the test dataset. Therefore, a standard holdout method split ratio is 70:30 or 80:20. Furthermore, the overall dataset is randomly rearranged before dividing it into the training and test set portions using the predetermined ratio.

There are disadvantages to the holdout method:

However, the Holdout CV method is ideal if time is a scarce project resource, and there is an urgency to train and test an ML model using a large dataset.

The k-fold cross-validation method is an improvement of the holdout method. It provides additional consistency to the ML model's overall testing score. This is due to how the training and testing datasets are selected and then divided.

The original dataset is divided into k number of partitions, and the holdout method is performed k number of occasions.

Diagrammatically this is shown as follows: 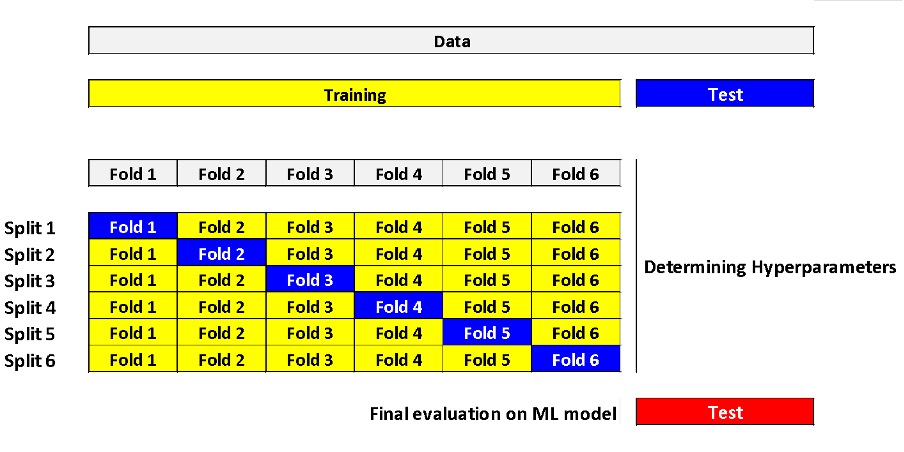 The test results of each iteration are then averaged out, which is called the CV accuracy. Finally, CV accuracy is employed as a performance metric to contrast and compare the efficiencies of different ML models.

It is important to note that the value of k is incidental or random. However, the k value is commonly set to ten within the data science field.

The k fold cross-validation approach normally produces less subjective ML models as each and every data point within the original dataset will materialize in both the testing and training datasets. The k fold method is ideal if a data science project has a finite amount of data.

The k fold method will likely be time-consuming because the algorithm has to be rerun k times from the beginning.

The following is an excerpt of python code for k fold cross-validation testing:

By using k-fold cross-validation there is a possibility that the subsets - or folds - might become disproportional. This situation can cause the training activity to produce biased outcomes, resulting in an erroneous ML model. The random shuffling of data and splitting them into folds using k-fold CV is the root cause.

To avoid such circumstances, the subsets or folds are distinguished using a procedure called stratification. In stratification, the dataset is shuffled to guarantee that each fold is a satisfactory miniature of the entire dataset.

Stratified k folds will maintain the same data class percentages within all the folds, based on the original number of data classes. A stratified k fold model can be trained with minority class datasets.

The following is a python code excerpt using stratified k fold cross-validation for testing and training:

This python example uses a stratified 4-fold cross-validation function call on a dataset with 150 samples from two unbalanced classes. The code shows the number of samples in each class and is then compared with KFold.

Leave p-out is an exhaustive CV method in which p number of data points are totally removed - or taken out - from the total number of data samples represented by n.

The model is then trained on n p data points and later tested on p data points. This process is repeated for all probable combinations of p from the original dataset sample.

Finally, the results of each iteration are averaged out to obtain the cross-validation accuracy.

In the python code below, the LeavePGroupsOut function call removes samples related to groups for each training and test dataset.

In this example, we Group 2 Out:

The leave-one-out cross-validation approach is a simple version of the Leave p-out technique. In this CV technique, the value of p is assigned to one.

This method is slightly less exhaustive; however, the execution of this method can be time-consuming and expensive. This is due to the ML model being fitted n number of times.

What is Rolling Cross Validation?

The N-Out CV methods above are not ideal for time series based data, and there are two reasons for this assertion:

Rolling cross-validation is a technique used to resolve these data preparation issues:

The rolling CV data subsets are created as follows:

With this data representation, and within the first iteration, the ML model trains on the data of year 1, and then tests it on year 2 and so on. Each iteration represents one year of rolling CV-based time-series data for training and testing.

In summary, CV is used to compare and assess the execution of ML models, model performance, and it is a powerful and influential tool. It allows data scientists to maximize the use of their training and testing data, and it provides valuable information regarding ML model algorithm performance.

In this article, we have examined what cross-validation is, and its significance to ML model predictability and overall preciseness. We then looked at the high-level steps to perform CV and the various exhaustive and non-exhaustive models commonly used in the data science industry, along with associated python code examples.